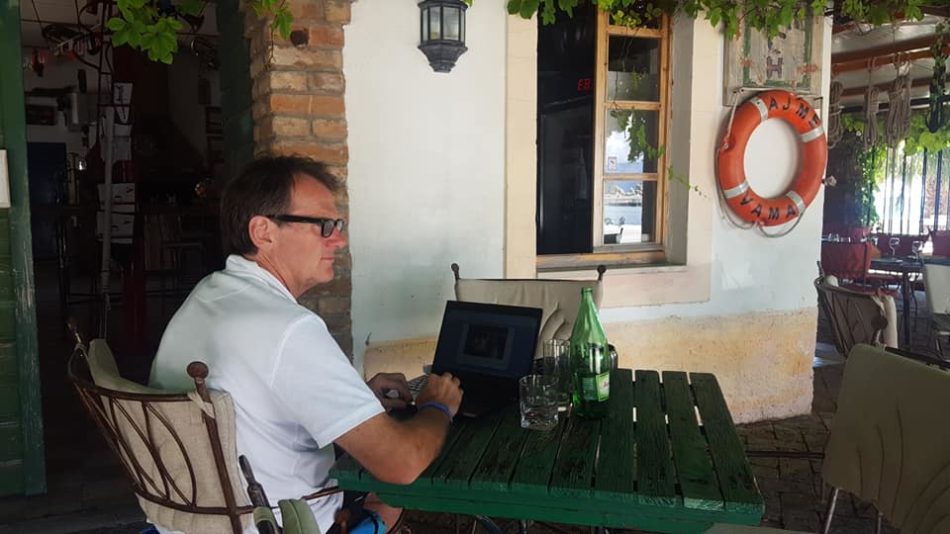 I first sailed around Croatia

in the summer of 2010 working as Head Chef aboard a 75-meter sailing yacht. Since then I have been fortunate enough to call Croatia a second home, always inspired to seek and satisfy my culinary cravings and appetite for first-rate hospitality. Working as a luxury yacht chef and having owned or co-owned a dozen restaurants or bars my expectations are high. Good fortune and a large Croatian family I can now call my own, I was fortunate enough to be introduced to Trpanj roughly five years ago.

It was then I first dined at the Tuna Bar that I would like to familiarize you with especially as I am spending the entire summer in Trpanj writing. You will most often find me here tucked up in a comfortable Hemingway pose enjoying a cocktail or a fine Peljesac wine inspired to prose by this Mediterranean paradise.

Trpanj was once a sleeping fishing village in the days when you threw out a line and were guaranteed fresh fish on a daily basis. Rich in history and culture it was home to fishermen and seamen to a landscape of centuries-old olive orchards and remarkable vineyards. The town flourished selling seafood and under the Yugoslavian administration was a popular tourist destination with up to 10,000 holidaymakers at one time. The Croatian economy mirrored harder times and Trpanj became a sleeping beauty. Croatian independence in 1991 saw a new direction in tourism and there were many positive changes as the world discovered Croatia; a tourist boom like no other followed suit with many travelers like myself yearning for a genuine Croatian hospitality experience. Trpanj soon catered to the growing tourist demand helped by the daily ferry that comes and goes from Ploce on a regular basis. As a consequence, the Tuna Bar was born and has successfully catered to customers wanting to try something unashamedly, authentic Croatian. The Tuna Bar fare soon reflected the traditional antiquity of the idyllic seaside village and what is the true essence of Croatian cuisine; seafood. It’s not surprising from a country that boasts over 1000 islands that seafood is at the very heart of every Croatian palate.

The Tuna Bar menu has always been full to the brim with every conceivable local seafood available. Co-stars in this culinary circus include fresh scampi, tiger prawns, and calamari. Leading the cast of Croatian aquatic stars is assuredly Blue Fin Tuna, which can be savored in such a variety of ways that you could dine here every day for a week and enjoy the Prince of the seas in a different way.

You might ask after all the controversy over the fishing of Blue Fin tuna what the legal state of affairs is fishing it. It’s a good question and many countries have raped and pillaged the global supply of this esteemed fish that is now of an endangered species in many oceans. However, in Croatian waters, there is a stringent legal process where only 12 fishermen are given licenses to fish Blue Fin Tuna with a fair-trade agreement. These fishermen are allowed to catch a limited quota of the passing wild fish by hand line and The Tuna bar has established a fruitful relationship being one of the limited restaurants in Croatia that sells it.

As any chef who has achieved anything will tell you fresh produce is paramount and then cooking it is a style that truly enhances both flavor and freshness. A large char-grill and open-air barbeque ensure this success or you might want to enjoy Tuna Carpaccio, fresh Sashimi or Tuna tossed in Spaghetti with local olive oil.

These gastronomic sensations can be enjoyed in one of Croatia’s paramount beachfront locations on a pristine pebble beach reflecting memorizing crystal clear, turquoise waters. Alfresco dining can be enjoyed under lush grapevines and conformable padded seating or inside the building’s structures and bar and indoor antechamber. Within feels like a time-honored fishing club with a high ceiling stud adorned with fishing paraphernalia, trophies, and nautical remnants. A fine selection of local and international wines has been prudently chosen to either match the menu or to be enjoyed by themselves emulating summer vibes. This is helped by the fact that the DOC Dingac appellation is one of the most prominent wine regions in all of Croatia. Additionally, a large selection of cocktails is available or a full-to-the-brim fridge of French Champagne.

The Tuna Bar deserves its quintessential status and under many full moons has honed its service and hospitality to be friendly, professional, and informative. The aquatic theme with fishing artifacts, antiques, or fun pieces of art additionally adds to the bohemian atmosphere. The charismatic owner is an avid Tuna fisherman, has a passion for art, sculpturing, and brass horns, and merits his own television fishing show as he is his happiest with friends out fishing or entertaining guests with his friendly dog Morska. He is also a classic car enthusiast and his 356 Porsche is most often parked outside in its original 1962 condition. One of his prized pieces of art he made himself is a gigantic swordfish in the beach garden made out of hoary steel and horseshoes surrounded by other nautical collectibles. You can also lie back on a beach bed and be served cocktails all day surrounded by palm trees as the gentle lapping of waves washes the clean pebble beach.

Music also features highly and changes throughout the day from when they first open from dusk and in the peak season viably to dawn.
Back to the menu as I have slowly drifted off track is the daily haul of fresh seafood caught by local fishermen friends and the daily blackboard fish of the day. You might be lucky enough to try line caught Wild Turbot, Black Grouper, Seabass, or Cod. Armin Omercic, the Head Chef has spent years mastering the art of preparing and cooking seafood, and for any real foodie like me, you are in for an epicurean indulgence. For small groups, he will happily prepare you a degustation menu based on the daily catch.

I recently enjoyed a five-course dinner matched superbly with local Posip Wines. As we fare-welled an enchanted sunset we were treated to sea snails that were cooked in the shell then cooled, then finely chopped with onions, herbs, and a little lemon. They were delicate, sweet, and resonated soft aromas of the sea. As a high-end chef, I have searched the world high and low for the best fresh Tuna available. Often I would pay up to two thousand USD a kilo for fatty Toro Tuna or about a third of that for Blue Fin Tuna which I would hand-cut for either Sashimi or Sushi. I can honestly say that the Blue Fin Tuna we ate as Sashimi was as good as the best I have ever tried, served with a little local olive oil, wasabi, soy, and pickled ginger. This was followed by perfectly cubed small pieces of Tuna assembling a petite tartare tower with a light Asian dressing so the texture and flavor of the fish were treasured. This was followed by Tuna Carpaccio with native capers, olive oil, and lemon zest. Again light and matched splendidly by the Posip white wine from Korcula. The grand finale was a large piece of Blue Fin Tuna that had been char-grilled and served with a Croatian Truffle Pea Puree. Armin had balanced the flavors to perfection as just the right amount of Truffle had been used to complement the flavors and textures of the fish. Char-grilled rare, the Tuna steak melted in your mouth and I was almost surprised just how good the quality of both the produce and cooking techniques that it soon navigated me on a path to epicurean bliss.

In the summer months as the restaurant and bar fill quickly so do the seats around the Teppanyaki bar as sizzling aromas of barbequed seafood indicate that sun tanning is done for the day as one is easily seduced by the smoking culinary delights. Then comes the Aperol spirits, gin, and tonics, and often champagne and evening summer festivities begin. Time seems to stand still in Trpanj especially as alluring sunsets of bursting carroty and auburn hues are enjoyed by all. Tables fill up quickly as the extensive menu is enjoyed by hungry dinners often succeeded by digestives such as local Rakia. Dancing under a full moon is common and is the odd proposal. Often there is live band music, Acapella singing, guest DJs, or saxophonist. The Tuna Bar is perfect if you are sailing around Croatia as it is only a stroll away from where you can berth your yacht in the safe harbor. Many regulars have been allured by the beauty of this magical setting and have decided to get married here enjoying unquestionably one of the world’s most beguiling and incandescent sunsets overlooking historic Hvar.

Or maybe you are an author like me looking for the perfect environment to be constantly inspired to write, hypnotized by the beauty of the landscape, coast, culture, history, and people. Here at the Tuna Bar, you will find me soaking it all in not worrying about a thing or where my next words will come from. 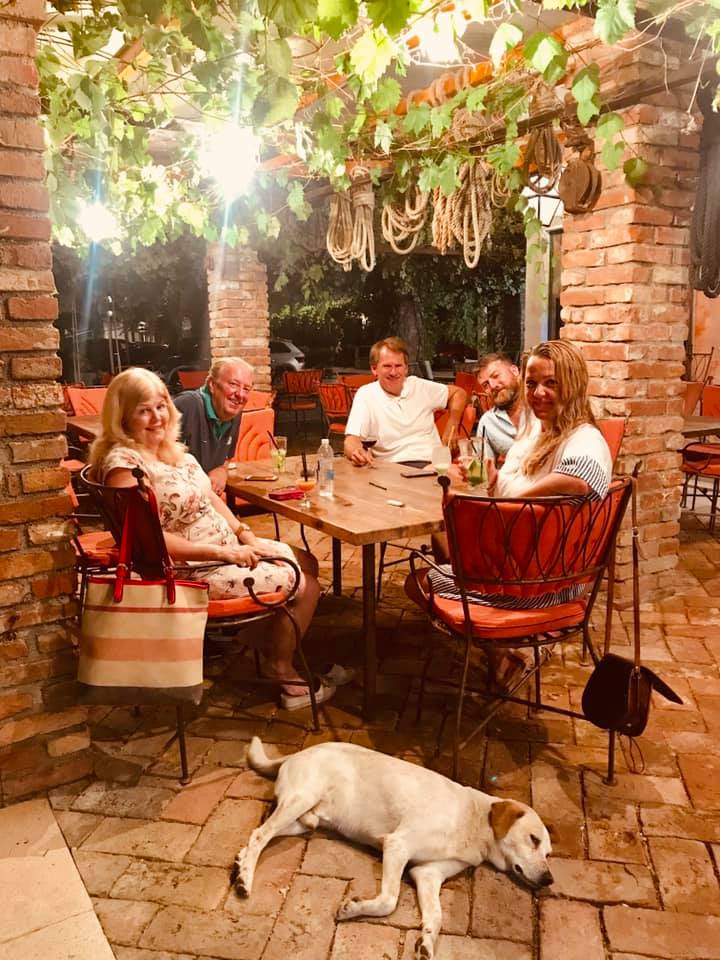